3D Printer Specs: What do they mean?

When the 3D printing industry exploded in 2014, a myriad of new companies rushed in, claiming to be the next revolution in 3D printing. Every week, I’d see a new professional 3D printing company crop up—each of them touting a product with a “new” feature or a “unique” specification.

Naturally, all of this novelty caught the attention of consumers and business buyers. With each product launch, more and more people became interested in applications for 3D printing, particularly in industrial engineering and design prototyping. However, as that interest grew, so did the use of meaningless marketing jargon in professional 3D printer specification charts.

To illustrate that trend, here’s a common specification comparison chart: 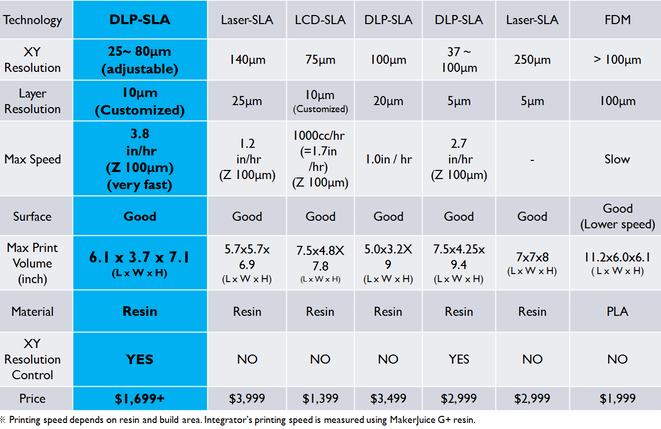 What do you notice about it? For me, what stands out is all of the capital letters, numbers, and parentheses. If I didn’t know better, I might look at this information and assume that I needed the highlighted printer. After all, it has the best specs and the most impressive (albeit confusing) set of numbers.

The problem? That chart doesn’t actually say much of anything.

Let’s start by diving into some of the individual specs listed in the chart above:

XY resolution is the most talked about specification for stereolithography (SLA) 3D printers. In many circumstances, it also happens to be the most useless.

Typically, XY resolution is used to describe the details or features of a part. In the chart above, the XY resolution listed for this digital light processing (DLP)-SLA printer (25-80 microns) is amazing, but what does that number actually describe?

In all likelihood, it’s the resolution of the actual projector (which is why it’s a variable range). That number doesn’t really tell the whole story. Ultimately, there are a plethora of variables that can affect a printer’s output. By looking only at XY resolution, we’re led to believe that there’s a 1:1 ratio between the size of a pixel on the projector and the cured resin of the part.

Here’s why that’s a faulty calculation: It doesn’t take into account the material itself, the print process, the software used, or numerous other variables (professional 3D printers have over 100 different settings that impact part quality). As a result, this spec doesn’t tell us anything about what you could actually produce with this machine.

Maximum speed is a hard metric to quantify, particularly across different printers. Again, there’s not enough information for us to really understand how these printers will perform when producing parts. Not only do the standard variables impact print time, so too do factors like geometry and orientation of the part.

For instance, a taller part will take more time than one oriented closer to the build plate because there are more layers to print. Also, the way that an object is oriented and supported will change the time it takes to print the part.

A common benchmark is how fast a printer can produce a one-inch cube. The problem with that example is that it’s very specific. Unless you’re a dice manufacturer, one-inch cubes aren’t a great way to estimate how long your part will take to print.

is what technique is used to print an object. Most consumer level 3D printers use FDM/FFF (Fused Deposition Modelling), although SLA (stereolithography) and DLP (Digital Light Processing) printers are becoming more common place in the consumer market. SLS (Selective Laser Sintering) 3D printers are also available; however they are limited to the professional market.

Positioning precision describes how accurately an axis can return or go to any specific point/height. For example, a printer has a Z precision of 2.5 microns and the user tells the printer to go to 100mm on the axis (vertical axis or height), it will be capable of going to that point within +-2.5 microns. So this means the actually height would be somewhere between 100.0025mm and 99.9975mm.

Don’t get me started on this one. Decisions in life would be so much easier if “good” and “bad” were the only ways of quantifying specifications. Surface finish was discussed earlier in relation to layer thickness, but one thing to keep in mind: there is no real specification for surface finish. Surface finish can differ depending on the geometry (curved vs. straight surfaces) and orientation. The only way to compare surface finish between printers is if every 3D printing company published results from an industry standard part and profilometer. Probably not going to happen anytime soon.

Build volume is measured in three directions. The Z axis is the height and the x, y axis are the width and length respectively.

Filament manufacturers will usually list what filament types are supported by the printer. The most common filament materials supported are ABS (Acrylonitrile butadiene styrene) and PLA (Polylactic acid); however there are a large number of printers that support other materials such as nylon. Additionally the vast majority of printers use either 3mm or 1.75mm filament sizes.

File Type is the type of file that is used to print a model with. This file is sliced into individual layers by the printing software and then sent to the printer. Some of the file types you may come across in 3D printing could include:

Firmware is a program which resides on the printer’s motherboard. The firmware is the link between software and hardware, it interprets commands from the G code file (generated by the file and 3d printing software) and controls the motion accordingly.

What is the difference between a LCD, OLED, AMOLED and Super AMOLED?

3D Printer Specs: What do they mean?

How to Check Shorting in Mobile Phone with Multimeter